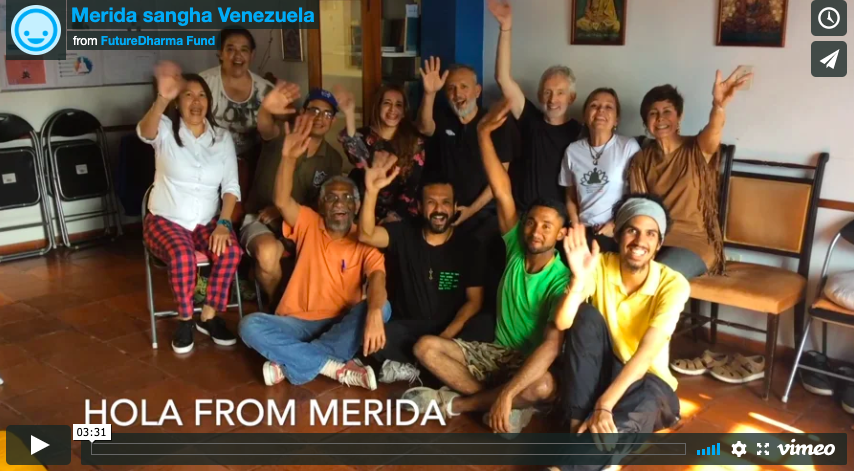 This month we bring you news from Usquert in the Netherlands, where the local sangha are creating a beautiful retreat centre. We then celebrate the ordination of Acalamati – the first new Order member from Venezuela.

Huge thanks to those of you who give to our projects and help make these things possible.

The building is owned by one of the Order members who has generously provided it to be used by the sangha. FutureDharma supporters are helping transform it into a retreat centre, with money from your gifts buying meditation equipment including cushions and mats.

Formally begun in January 2018, the sangha has two Order members, Silavadin and Amritapurna, and six regular members. The retreat centre is already becoming a place where the sangha can deepen their community through shared ritual and practice.

You can find out more about Triratna Groningen on their website.

…I want to belong to this Order… I share the visions of Bhante and the Order and would like to be an arm of Avalokiteshvara.

After 20 years as a Mitra in Merida, Venezuela, Ricardo Rico got his wish.

[Acalamati (front row, far left) with the other ordinands at Guhyaloka.]

Ordained on 29th April at Guhyaloka, Ricardo is now Acalamati, “He who has an unwavering mind”. Acalamati’s name couldn’t be more fitting and reflects his devotion to practice in extremely difficult circumstances in Venezuela. You can listen to the moment that Acalamati (then Ricardo) received his invitation for ordination.

Our sangha in Merida continue to face many challenges. The political situation continues in turmoil, and daily life, simply staying safe and feeding their families is a struggle for many. Yashodeva flew out from the UK to spend time time with the Merida sangha. In this short video you can meet some of the friends he made in the sangha and hear about their lives in Venezuela and how their Buddhist practice helps them live with more purpose and hope.

Acalamati is the first new Order member from Merida. Until recently it has been almost impossible for Mitras to undertake ordination as there are no GFR training retreats in Venezuela and the cost of flights out of the country are impossibly high. FutureDharma has set out to change this. Generous gifts from our supporters have already paid for order members from Europe to fly out to Mexico and run a GFR retreat and for Acalamati to take part too. Gleysa (a Mitra in the video) is on the DharmaLife course at Adhisthana right now – all thanks to FutureDharma supporters.

But it doesn’t stop here. We’re committed to supporting the inspiring sangha in Merida. Their situation is becoming increasingly difficult as Vajranatha, who has been holding the sangha as the sole Order member, will be leaving Venezuela shortly.  We’d like to help other GFR Mitras in Merida take part on the DharmaLife course. If you feel inspired to help this sangha and our other projects please give what you can.

Give now to the FutureDharma Fund

See also other ways to give