It’s the end of October, nearly half past ten in the morning UK time, and Bhante is very ill in hospital. The Adhisthana community, guests and volunteers gather in the shrine room.  With us are members of The International Course: 14 Order Members from around the world who carry crucial Triratna responsibilities. They’re here for four weeks to learn from Adhisthana’s Vision Team – Dhammarati, Saddhanandi, Lokeshvara, Aryajaya, Saddhaloka and Parami – and to develop the deep connections and shared vision that our founding generation forged in 1970s squats in London. They’re studying Bhante’s Four Lineages and leadership skills, and helping with each other’s local challenges. 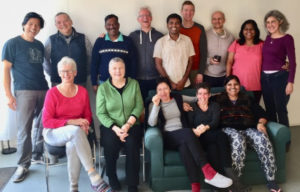 The atmosphere in the shrine room feels otherworldly, even magical, but also tense. Then Parami told us: Bhante Sangharakshita, our teacher, had died.
An important part of Triratna’s future was sitting in that room. They would hold this moment with them, and travel home with it, to America, Germany, India, Australia, the Netherlands, Ireland, and Mexico.

The fact that they were all at Adhisthana, at that time, added a strange significance to the timing of Bhante’s death. As Saddhanandi said, “The King died, and the next generation was there waiting”

These 14 Dharmacharinis and Dharmacharis led many of the 24 hour vigils for Bhante and some stayed on to bury their teacher. Then they returned home to their sanghas to exemplify his vision and pass on what they’d learnt here.

All of this was only possible because of the gifts of FutureDharma supporters like you, which paid for the International Course. Thank you.

Two of the course participants, Dharmacharinis Tarahridaya and Abhayanavita, were Bhante’s last visitors, just days before his death. They both met Triratna as teenagers, and have worked tirelessly for our social and Dharma projects in India ever since. 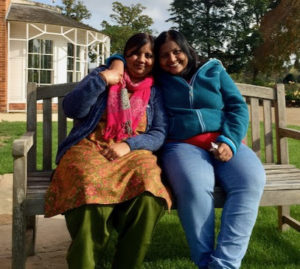 The International Course is just one of FutureDharma’s 36 bold and innovative projects this year. They are all seeding and strengthening Triratna sanghas, to change the world.

The Adhisthana Vision Team would like to repeat the course in 2020. But there are many more Triratna projects asking FutureDharma for money than we can afford to help. If you are already giving then please continue, ideally each month. And if you are not currently giving then please do, by clicking here.

With thanks and metta,
Jai Teather
FutureDharma Fundraising and Communications

Participants talk about the impact of the International Course on them.